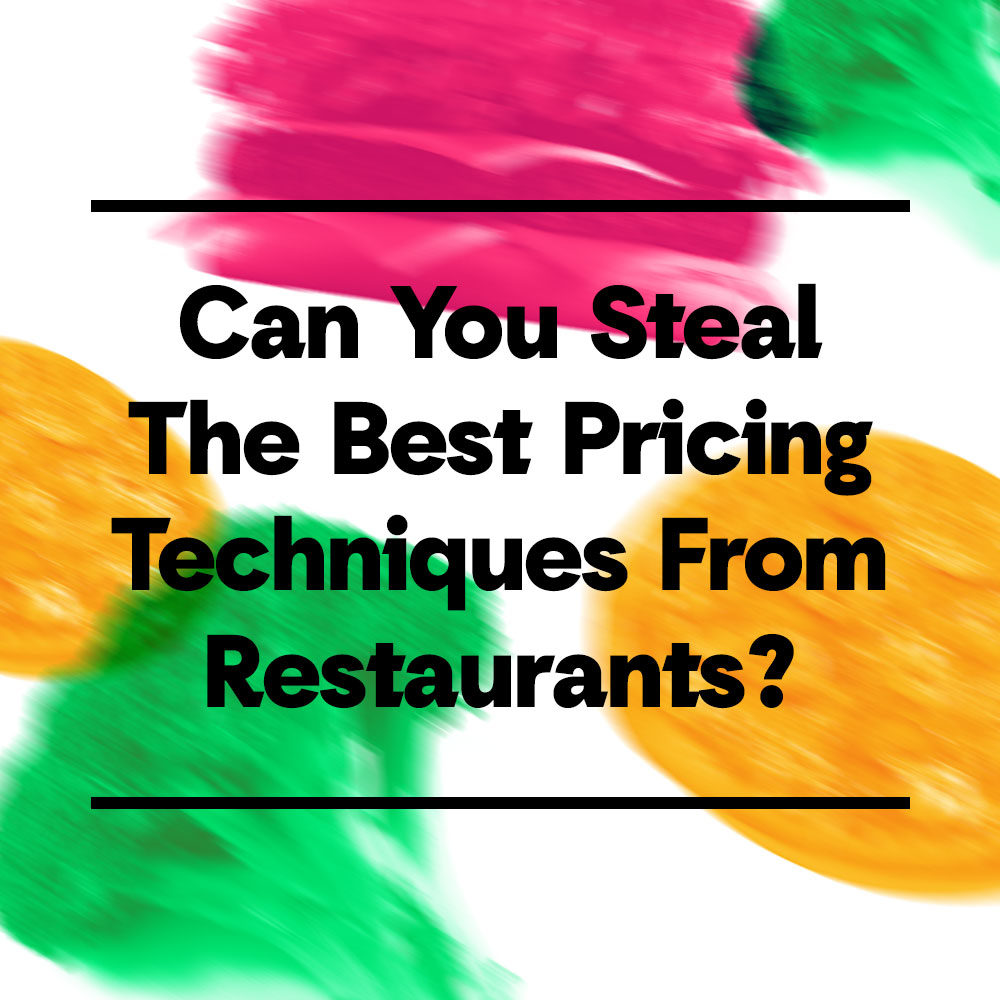 You can learn a few awesome pricing techniques just by looking at how menus are designed.

When I look at restaurant menus, my brain divides into two. The primitive part, which makes salivate at the food. At the same time, there is the analytical part, which tries to work out whether or not I’m subjected to pricing manipulations. To this day, I’ve used three techniques that are used in restaurant menus, through my web design pricing proposals.* Two of them have significantly improved how much I charge these days. The third actually did some damage. Here’s what I learned.

(*Those lessons are from “Priceless: The Myth of Fair Value” by William Poundstone)

If you happen to go to the St. Andrews restaurant in New York you’ll notice something striking about their menu. Next to the cost of the dishes the dollar sign is missing. 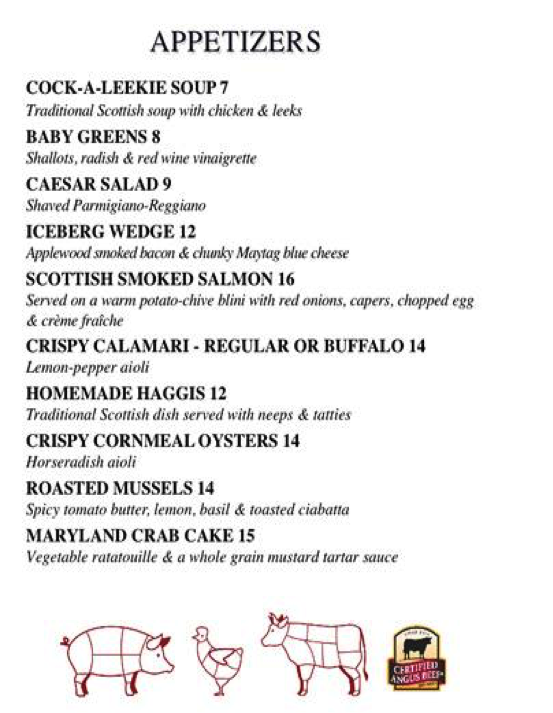 A part of the St. Andrews Restaurant Menu

Was it an accident? Not at all.

In a study conducted at Cornell University in 2009, researchers found that people who received the menu without the dollar signs, spent significantly more money than those who received a menu with the usual currency sign present. The study was conducted at St. Andrews and it’s clear which menus they chose to leave at the restaurant.

Martin Lindstrom – a marketing expert, and writer for Time Magazine, explains it this way: “The dollar sign is a symbol of cost, not gain.” It turns out that when we see the dollar sign, our brain activates a defense mechanism that wants us to keep our money, and thinks about how to get around this expenditure.

I recently took off the currency sign next to the numbers that appear on my proposals. Over my web design pricing, I write something like: ‘All prices are in US dollars, VAT not included’ and then the numbers I write appear without a dollar sign. I want my clients to concentrate on stimulating description of the dishes, not their price.

Add An Expensive Steak To Your Proposal

Next time you go to a restaurant, search the menu for an anchor. This is the item on the menu with a steep cost but not necessarily worth buying. Below or above it you will see a different item with a rather high cost (profitable), yet even despite its high cost we compare it to the first item, and it suddenly doesn’t seem so expensive.

An anchor then is an item that make “everything else near it look like a relative bargain” – William Poundstone explains in his fantastic book “Priceless: The Myth of Fair Value”. Notice the dish called LE BALTHAZAR which costs 155 dollars on the menu of BALTHAZAR in New York. This is the anchor that makes all other dishes look not so expensive after all. 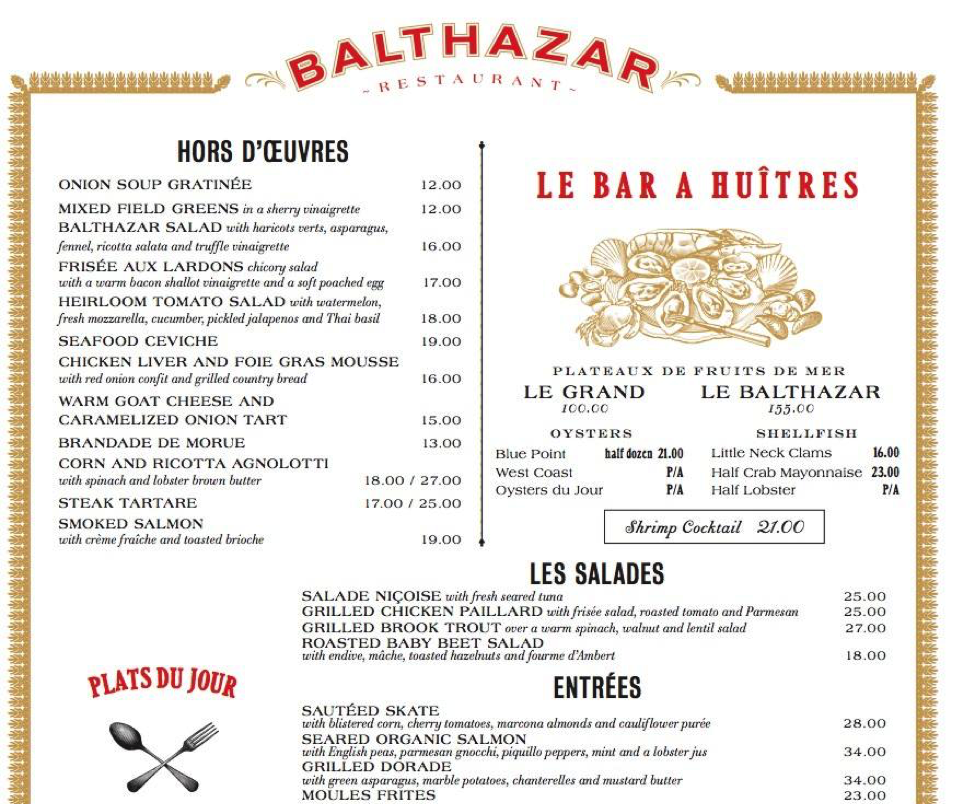 (By the way, have you noticed that this menu does not show the dollar sign as well?)

Why does this work on us? The psychological explanation rather interesting. When we come to a purchase, we face uncertainty in decision-making. So we base the decision whether to buy or not, on the “loss” or “gain” compared to some alternative, rather than considering its absolute objective value.

How you can use anchoring on your proposals? If you use the Three Pricing Levels technique, then your most expensive option will become the anchor. For the middle option put something that would be a little cheaper than the most expensive option, but still very profitable for you in terms of price. Of course, it still needs to be an attractive option to the customer – there is no point in offering a tomato salad next to an anchored steak.

Now you will earn money regardless of what the customer chooses. If he chooses the expensive version – all the better. But, even if he chooses the middle option, the cheaper one, then you still get a good price for what might have seemed expensive without an anchor. And the customer will be happy because he feels that he made a worthwhile decision compared to the anchor.

Do Not Underestimate Your Customers

Another thing that always noticed in certain restaurants is the use of Odd Pricing; that is the use of unrounded numbers – for example, a Coke bottle that costs 1.99 instead of 2 dollars.

Why is it easier for us to spend 9.97 dollars than 10 bucks on pizza? As we understood from the psychological explanation I outlined in the previous section, when we come to buy something, we compare the price with any other alternative.

Our brains like rounded numbers, so when we compare an odd number we’ll do it to the number closest to it. So the 9.97 is compared to 10 and we’ll feel we’ve gained! We pay 9.97 for a pizza that our mind compares to 10, without having any idea much how this pizza is really worth to us.

But should you use odd pricing in your web design pricing offers? From my experience, you shouldn’t.

This method has become so frequent that it is now synonymous with someone ‘trying to sell you something”. A 1997 study showed that 60% of pricing in advertising materials ends with the number 9, and the last thing you want is for your customers to feel like your proposal is promotional material.

Not long ago, I tried to use odd pricing in an offer for the development of a large commercial website. One of the web design pricing offers appeared as 5599. When my client saw that he said “Lior, are you trying to sell me something as if we’re at the supermarket? What’s this 99? Couldn’t you just write 5600? “.

I can’t even tell you how sorry I felt for that – in my client’s mind my proposal instantly became a cheap sale. I’ll never do it again.

Now if you’ll excuse me, I’m going to eat something.