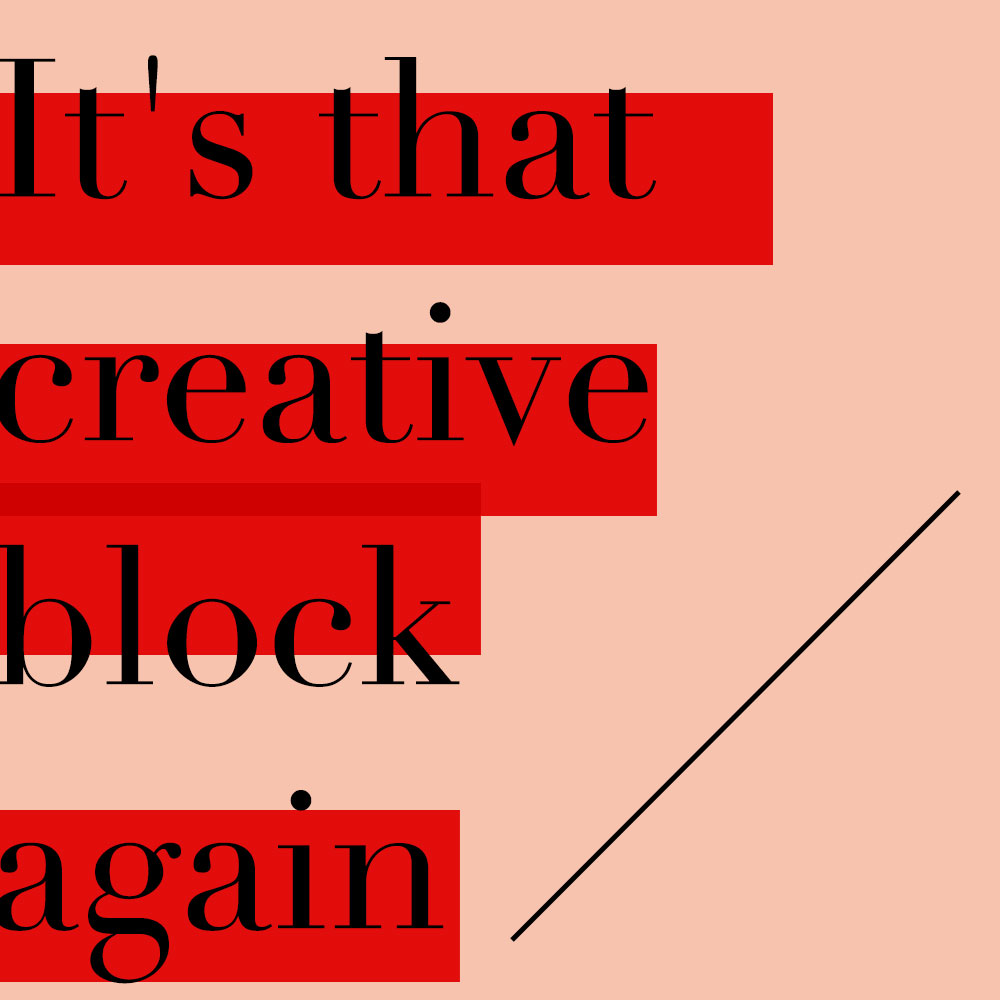 My heart is pounding. Suddenly cleaning up the house seems like a fun task. Maybe I should take the trash out too?

Anything that will keep me from sitting down in front of the computer and facing the fact I have no idea what to do.

No matter how many years I’ve been doing it, no matter how many times I’ve felt like this before and no matter how sure I am that everything will end up OK, it’s always as frightening as it was the first time. What if this time I fail to come up with an idea? I’m a freelancer, so there’s no one in the room with me I can ask for help and no boss to take responsibility if I come up with nothing.

It stresses me out. Maybe this time the truth will finally come out: I’m not that talented.

Creativity is a kind of magic. No one really knows where it’s coming from. Scientists and experienced creatives all agree on one thing: feed yourself with loads of information, let your subconscious work on it, and a creative idea will pop out eventually – most likely while you’re showering.

We’re not sure quite when, but we’re hoping it will happen before the deadline hits.

When it happens to me, I stare at the wall above my computer and imagine three words written on it in gorgeous handwriting typography: Trust the Process. I tell myself that one day I will print out those words and stick them on my wall. I never get around to it.

Magic or not, at the end of the day I’m a professional and getting paid for this project so I don’t think saying to my client “listen, I really gave it my best, but no ideas came up” is particularly legit. That’s why I need to create a magic-less process for myself, which will bring some kind of result, and hope the magic will bother to show up in time to make everything better.

Start with something crappy

That’s how we get stuck.

If, on the other hand, we would say to ourselves: “let’s do something crappy,” our lives would be that much easier. Anyone can do a shit job. Want a bad logo? Give me two minutes. Want a bad name for your brand? 20 seconds will suffice.

When we do crappy work, two great things happen:

It’s only a stupid myth that all these geniuses we keep reading about came up with their brilliant ideas on their first try. The truth is they came up with them after a handful of crappy ideas – we just didn’t get to see those. Edison, who invented the lightbulb after failing at it 10,000 times, said: “I haven’t failed. I invented 10,000 lightbulbs that didn’t work.”

How to build your process

During the 1960s, a few ad agency giants wrote a short book titled A Technique for Producing Ideas. The essence goes something like this: study your topic thoroughly. Read, research, talk to people. Fill up your brain with info. Then try and come up with ideas. Everything you come up with will suck. Then forget about the project. Go do other things. Or take a shower. After a few days, the idea will come to you.

The truth is I felt kind of down when I read that. I kept asking myself: but what if they don’t come?

Improve, improve, improve: create an iterative circle: Do something, understand why it’s no good, try again. The more time I have, the more chances I have to go around and improve. The result follows suit.

Sometimes the big idea, that ‘eureka!’ moment, does show up – sometimes it doesn’t. Faith is part of the process. I believe it will come to me, and I know from experience that if you try hard enough – eventually, it usually does.